Around 230,000 young people living in Serbia aged between 15 and 30 belong to the NEET category that comprises individuals that are not in education, employment, or training. This figure makes up 20 per cent of the total number of young people in Serbia.

The conference titled “NEETworking – National Dialogue on the quality of support to NEET youth”, organised by the Belgrade Centre for Human Rights, Centre for Youth Work, and Ana and Vlade Divac Foundation, marked the launch of the National Dialogue for the implementation of targeted measures aimed at tackling the issues faced by this particular youth category, but other categories of youth, too. The conference gathered over 100 participants, representatives of ministries and other public institutions, municipalities, youth offices, centres for social work, civil society organisations, young people, and international donors.

Head of the EU Delegation to Serbia, Sem Fabrizi opened the conference by pointing out that this is one of the key issues faced by both the EU and Serbia given that youth unemployment leads to greater risks of social exclusion. “Serbia is facing similar problems like EU Member States when it comes to NEET youth population. Almost 20% of young people in Serbia belong to this group. The position of young people is even worse when we take into consideration those who are vulnerable on several different levels: young women, youth with disabilities, young people without qualifications, or the ones living in rural areas…” Mr. Fabrizi pointed out, adding that the EU has reached the lowest number of NEET youth in the last 10 years – around 12%. “The future of a country lies in the hands of its youth, and their future lies in the hands of all of us. Let us join forces and resources to secure the support young people need for a brighter future!” Mr. Fabrizi added.

Mirko Janic, State Secretary at the Ministry of Labour, Employment, Veteran and Social Affairs of the Republic of Serbia, pointed out that this is one of the Ministry’s top priorities, because, according to surveys, the youth still face the biggest issues in the labour market. “Most young NEETs are actively looking for job. The Ministry is preparing a new strategic framework for employment policy for the 2021-2026 period. The Strategy will put special focus on the integration of the youth into the labour market, as well as on the initiatives and models aimed at increasing employability and incentives for hiring young people to the level of EU Member States. Significant attention will be paid to creating conditions for the hiring of highly-educated young people, so that they remain in the country,” Mr. Janic emphasised, and praised the launch of the initiative. 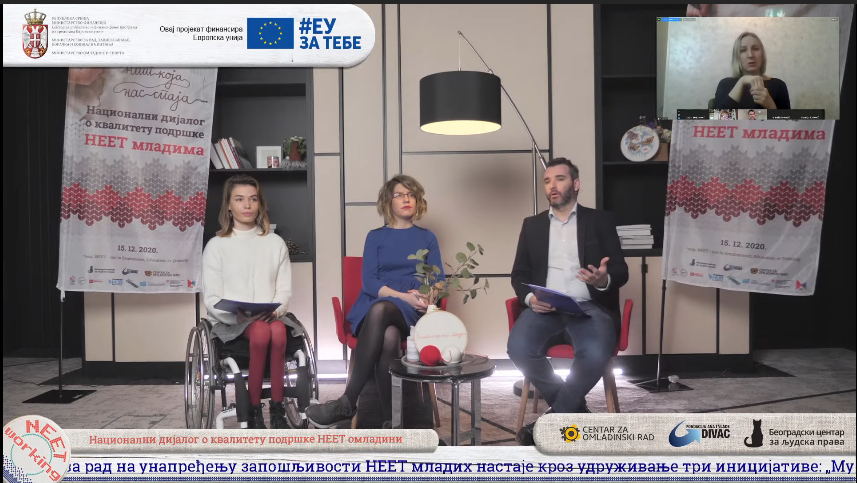 Irma Lutovac, Team leader of “EU Support to Active Youth Inclusion” laid out some examples of good practice in EU Member States and highlighted that, thanks to the Youth Guarantee programme, over 24 million young people have entered the labour market, over five million of whom belonged to the NEET category.

Vanja Kalaba, Executive Director of the Centre for Youth Work, one of the initiators of this process, pointed out: “The funds invested in prevention are always a better investment than the funds needed to address the problems of unemployment, exclusion, or the migration of young people away from the country.”

The recording of the conference can be found here, along with the study entitled “The status of NEET youth in Serbia in 2020”.

The “NEETworking” platform, designed to increase employability of NEET youth, was created through cooperation of three EU-supported projects: “My Career from zero to hero – strengthening the network of civil society organisations in the Western Balkans to implement an integrated model for youth employment for future jobs of the 4.0 revolution”, implemented by the Centre for Youth Work, “Our community, our future – greater cooperation and employability of the youth”, implemented by the Belgrade Centre for Human Rights and “WB&T for EmploYouth” implemented by Ana and Vlade Divac Foundation.

In the coming period, several Serbian Ministries and civil society organisations, joining forces within the NEETworking platform, will work on developing specific models of support for NEET youth employability with the help from the Delegation of the EU to Serbia.

There are no upcoming events at this time.